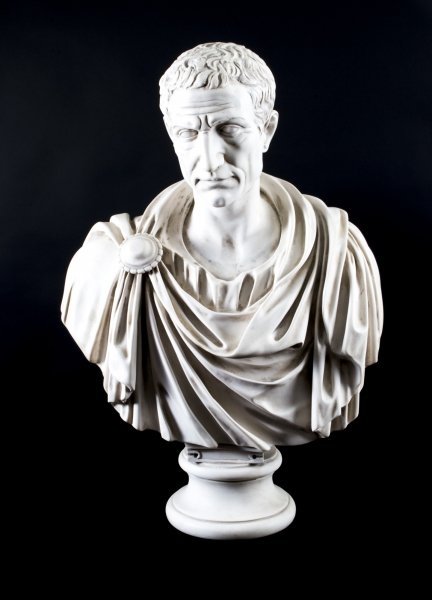 Ref: 02947
Price: £650.00
A beautifully sculpted marble bust of the Roman politician Marcus Brutus, dating from the last quarter of the 20th century. ...
Question about item

A beautifully sculpted marble bust of the Roman politician Marcus Brutus, dating from the last quarter of the 20th century.

This high quality bust is made from marble dust or artificial marble.

Marble dust is combined with cement or synthetic resins to make reconstituted or cultured marble. The appearance of marble can be simulated with faux marbling, a painting technique that imitates the stone's colour patterns.

Marcus Junius Brutus (early June 85 BC – late October 42 BC), often referred to simply as Brutus, was a politician of the late Roman Republic. He is best known in modern times for taking a leading role in the assassination of Julius Caesar.

Marcus Junius Brutus was born in or about 85 BCE, as the eldest son of a Roman politician with the same name, a man who never made it to the top. Father Brutus was killed in 78 by Gnaeus Pompey, a young general who was to become famous. The boy was educated by the half-brother of his mother Servilia, Marcus Porcius Cato, and later adopted by a relative of his mother, Quintus Servilius Caepio. To honor his adoptive father, the young man started to call himself Marcus Junius Brutus Caepio.

In 59, a man named Vettius declared that Brutus and several other men were part of a complot to kill Pompey. In fact, there was no such complot, and one of the consuls af that year, the popular politician Gaius Julius Caesar, an ally of Pompey, did his best to get rid of the accusations. Caesar had a good reason for this: he had an affair with Brutus' mother, and he did not want to bring the young man, whom he had often met at the house of his mistress, into troubles.

During the next two or three years, Brutus was with Cato on Cyprus, which had been conquered by Pompey and was finally in annexed in 58. We happen to know that Brutus managed to help the town of Salamis, which desperately needed help; the loan had an interest of no less than 48%. As a rich man, he returned to Rome, where he married a woman named Claudia.

In 53, he was chosen questor, the financial magistracy which a Roman politician had to occupy when he started his career. He was responsible for the taxes in a province called Cilicia (where his father-in-law was governor), and used the opportunity (and the army of Cilicia) to settle accounts in Cyprus. The next governor of Cicilicia, Marcus Tullius Cicero, condemned this behaviour.

Meanwhile, the situation in Rome was becoming dangerous. Two generals had become very powerful: Pompey, who controled Rome, Hispania, and Caesar, who was conquering Gaul and had obtained a fine army, lots of money and enormous popularity. The chances of a civil war were growing every day.

Meanwhile, Brutus served as military commander in Cilicia and Macedonia. Politically, he had later sided with conservative politicians like Cicero and Cato, who wanted to defend the rights of the Senate against the generals. When the inevitable war between Caesar and Pompey broke out in January 49, Brutus the conservatives sided with the latter, and were defeated in August 48 in the the battle of Pharsalus in Greece. Caesar showed clemency to the son of his lover.

Brutus was now considered to be a friend of Caesar, who sent him on an important mission to the east, made him governor of Cisalpine Gaul (i.e., the Po plains) in the years 46-45, choose him as praetor for the year 44 and promised him the consulate in 41. No man had received similar, extravagant honors.

However, in his heart, Brutus remained a conservative. He and Claudia were now divorced and he remarried with Porcia, the daughter of the conservative leader Marcus Porcius Cato. At the same time, he wrote a pamphlet in which he honored his father-in-law.

In February 44, Caesar showed clearly that he would never restore the republic that he had overthrown. He received the senators as a king (not rising from his seat when they entered the room), wanted himself to be crowned (text) and had himself proclaimed dictator for ever. All this was extremely unrepublican, and Brutus decided that he had to act. 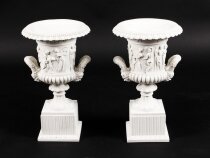