For its time, Art Deco furniture was truly avant garde, boasting a combination of stylised lines, vivid colours, and playful motifs. First seen at the International Exposition of Modern Industrial and Decorative Arts in 1925 in Paris, the style flourished in the optimistic global environment after World War One. The bold tones, geometric forms and symmetric patterns of Art Deco celebrated the opulence and extravagance of the 20s, 30s and 40s. 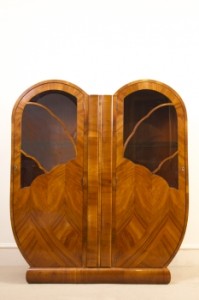 During this era, the increasing popularity and availability of long-distance travel exposed people to new cultures which influenced the design of Art Deco furniture. For instance, Greek and Roman architecture added proportion and balance while Asian artefacts inspired the style’s glossy finishes. Art Deco also borrowed two-dimensional silhouettes and other playful motifs from ancient Egyptian, Mayan and Aztec artwork.

Although Art Deco furniture does indeed embody a sense of simplicity with its straight lines and bold colours, this doesn’t mean the designs are plain. In fact, this style adds plenty of embellishments to the overall appearance. For instance, different coloured woods could be used to provide contrast. Alternatively, various materials can be combined to add more detail. Naturally grained wood, tortoise shell, animal skins and patterned fabrics are some examples. In the later years of Art Deco, stainless steel, chrome and plastic were also used as demand for less extravagant furniture increased. 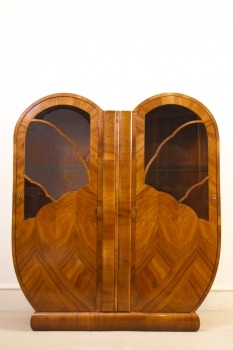 Chairs made during this period were typically created by combining angles and curves. Modern and classic materials, such as chrome and leather, were also used for contrast. Art Deco cabinets were generally large, featuring either natural, lacquered wood that showed off the grain or panels painted with primary or metallic colours. Beds usually had oversized head and footboards featuring motifs inspired from ancient civilisations.

There were two trains of thought among the different Art Deco designers – that items should be hand-made through the artist’s skill or created with modern machine production methods. Some of the more prominent followers of these two extremes include Eileen Gray, Ludwig Mies van der Rohe, Paul Follot, Raymond Subes and Emile-Jacques Ruhlmann.

View our beautiful selection of Art Deco antiques or contact us to enquire about sourcing a specific item.