Unquestionably one of England’s very finest silversmiths, Paul Storr’s reputation for wonderful Regency period silver work is second to none.

Paul Storr was born in Westminster in 1771 and in 1785 at the age of only 14 he was apprenticed to the Swedish born silversmith Andrew Fogleberg of Church Street, Soho.  Fogleberg worked in a highly ornate neo-classical style which greatly influenced his young protégé.

Paul Storr’s own silver hallmark was entered in 1792 while he was working with William Frisbee.

Storr then began to work on his own and started to gain recognition and patronage, establishing his reputation especially after having work commissioned by King George 111.  At this time he was also commissioned by the Duke of Portland to create a gold font and in 1799 he created the very famous Battle of the Nile cup for Lord Nelson which is now on display at the National Maritime Museum in Greenwich.

Storr’s workmanship, creativity and reputation really became established when he began working for Royal silversmiths Rundell, Bridge and Rundell in 1806.  Storr had been pursued by Phillip Rundell, who recognised his exceptional talent, for three years before he finally agreed to join this highly prestigious firm. 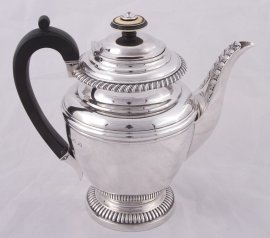 Working for Rundell, Bridge and Rundell, Paul Storr created many memorable silver pieces often working to the firm’s own designs.  The commissions he worked on ranged from the highly ornate to quite simple items such as dining plates and cutlery.

After thirteen years with Rundell, Bridge and Rundell Storr again decided to set up business on his own so that we could have more artistic freedom and he opened his own shop in 1819 concentrating on simpler more naturalistic pieces which retained his hallmark high quality finish.

Seeking to expand into a more prestigious location he went in to partnership with John Mortimer opening the Storr & Mortimer shop together in London’s Bond Street in 1822.   However this venture was marred by Mortimer’s poor sense of business management and the business closed in 1839 with Storr finally retiring at the age of 68, moving to Tooting with his wife Elizabeth where he died five years later. 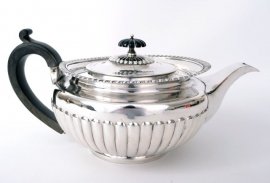 Paul Storr’s legacy can be seen in wide variety of truly remarkable silver ware all of which reflects his unsurpassed craftsmanship and attention to detail.  Interesting examples of his work include the massive and highly ornate urn created for Woburn Abbey in 1800; the Theocritus Cup in the Royal Collection; Lord Spencer’s ice pails of 1827; the beautiful Woburn candelabra of 1807 and the silver wine cooler of 1810 now on display in the Vermeil Room in the White House.

As well as these substantial and ornate signature pieces he also produced a superb range of more simple table ware which is highly sought after and collectable and can make a very desirable addition to a collection of antique silver.