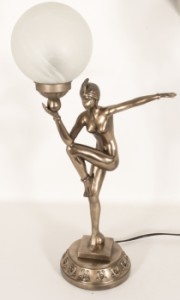 The origins of the Art Deco movement – the Roaring Twenties

After the horrors of the First World War and the demise of the old Empires, many artists, designers and architects rejected the past and were inspired to look forward. They embraced a futuristic spirit of optimism and modernity which flourished in the 1920s before being dashed by economic collapse, the rise of Fascism and the coming of the next World War.

Art Deco style became well known and popular after the Exposition Internationale des Arts Décoratifs et Industriels Modernes held in Paris in 1925. This seminal exhibition, from which Art Deco derives its name, showcased the most modern design and art found anywhere in the world at the time. Art Deco was a globally inspired style that was influenced by many different cultures and at the time was truly radical and modern. Today famous Art Deco buildings, such as The Chrysler Building in New York and some London Underground stations, have become iconic, much loved landmarks and the many different pieces of furniture and antiques that were influenced by this style are again in very high demand. Art Deco was an exuberant and positive art style that was hugely popular in Europe and the US during the inter-war period. In the 1930s, as mass production techniques and cheaper materials became available, Art Deco became very popular with the middle classes and was no longer exclusively associated with the aristocracy and the fabulously wealthy. After the Second World War this popularity faded and new post war influences such as post modernism and minimalism came into vogue.

The materials and characteristics of Art Deco furniture 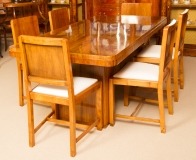 Art Deco designers intentionally used extremely modern materials, including chrome, aluminium, plastic, marble, lacquer and even animal skin. Although much Art Deco furniture is still predominantly made of wood this core material was used in new innovative ways forgoing the often stiff, elaborate, historical styles of the past. 1920s French high end Art Deco furniture was manufactured from exotic woods such as ebony and burl walnut, maple and ash.

Later, as some of these woods became scarce, exotic veneers such as Brazilian jacaranda, zebra wood, palmwood, and calamander were used. Other veneers including sycamore, amboyna, mahogany and violet wood were also popular.

Inlays could be of brass, ivory and mother of pearl. Pieces were finished with hides including shagreen, (a sharkskin often used for dressing table or desk tops) snakeskin, oriental silks and even pony skins. The optimistic focus on the future means that Art Deco furniture feels relaxed and welcoming with a focus on comfort and style.

Veneer was also used extensively in Art Deco furniture and the collector should check that veneer is not chipped or damaged as this can be difficult to repair or replace. Designers believed strongly in the concept that form should follow function. The idea of modular design first came to the fore with Art Deco furniture – different pieces could be used together or separately in a variety of flexible ways according to the owners’ needs and wants.

Many of the very top manufacturers and designers based in Paris include Jacques Emile Ruhlmann, Paul Follot and the Sue et Mare partnership. Other very collectable Parisians include:

Regent Antiques is pleased to offer an extensive range of practical and collectable Art Deco furniture and other Art Deco collectables – please contact us for further details.