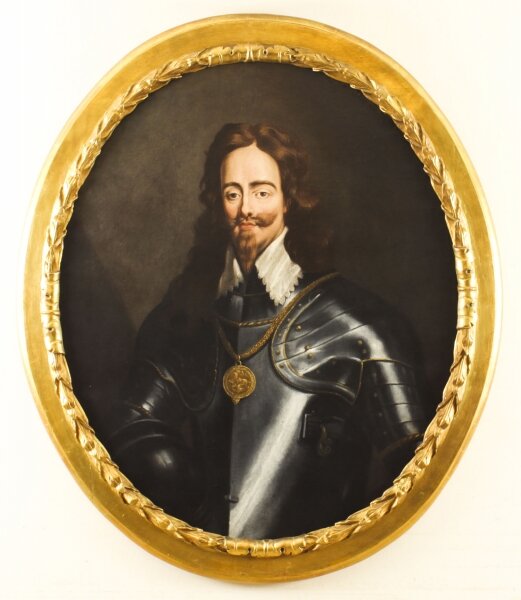 Ref: A2785
Price: £ 0.00
This is a beautiful large antique oil on canvas painting of Charles I, after Sir Anthony van Dyck, the renowned court...

This is a beautiful large antique oil on canvas painting of Charles I, after Sir Anthony van Dyck, the renowned court painter,  dating from the mid 18th Century.

The portrait of Charles I is a very striking image of the King when he was at the peak of his powers in full armour, surrounded by symbols of royalty.

Add some charm to your collection with this amazing  royal potrait.

In excellent condition the painting and frame having been beautifully cleaned in our workshops, please see photos for confirmation.

More
King Charles I
Never before, or since, has a king met such an untimely end like Charles I. He was proclaimed king in 1625 upon his father’s death and spent the entirety of his reign in conflict with his parliament.
Such hostility escalated and crossed the spectrum of political and social spheres, ravaging the country into a state of civil unrest which culminated in the execution of the king.
He started his life in Fife, where he was born in November 1600, the second son of James I of England and his wife, Anne of Denmark. When he was five years old he received the title Duke of York and was also made a Knight of Bath.
During his childhood, he received a classical education based on mathematics, languages and religion, taught by the Presbyterian, Thomas Murray.
As the second son, he was close to his older brother Henry who was very popular, well-known for his strength and was in direct contrast to his younger brother. Henry, as the eldest, was destined to be king, however, sadly, at the age of eighteen he died of suspected typhoid.
This left twelve-year-old Charles as the heir apparent: four years later he inherited the title of the Prince of Wales.
By 1624, James I’s ailing health became increasingly apparent, leaving ultimate control in the hands of his son Charles. On 25th March 1625, James I passed away leaving Charles to ascend the throne and embark upon a reign that would go down in the annals of history.
As the newly proclaimed king, one of his first requirements, with the help of the Duke of Buckingham, was to find himself a wife. Such a task sent Charles and Buckingham to Spain, however their attempts to make a match were futile and he then turned his attention to France.
On 1st Mary 1625, Charles married by proxy Henrietta Maria of France, first meeting her in Canterbury the following month. The marriage proved successful for Charles, producing five surviving children, however the match was not approved of by all, particularly those in parliament who feared his wife’s Roman Catholic background would cause religious problems closer to home.They were to be proved right as, despite Charles’s assurances to parliament that religious restrictions on Catholics would not be altered, he had already made such a promise to his Catholic brother-in-law Louis XIII of France.The union would also result in a treaty that gave seven English ships to the French in order to suppress the Protestant Huguenots at La Rochelle. Such an agreement was kept under wraps for obvious reasons.

In February 1626 the following year, Charles’s coronation took place at Westminster Abbey, without his wife by his side who made clear her disapproval of the Protestant ceremony.
His reign had begun under a shroud of religious suspicion: as time went on, these concerns grew.Charles’s religious convictions were not the only thing to come under scrutiny; his relationship with George Villiers, the Duke of Buckingham, also caused discontent amongst those who believed his ‘favourite’ had too much influence. By 1628, Buckingham was no longer was a problem; he had been assassinated.
In the course of his reign, he would dissolve parliament three times in just four years. His inflexible approach to governance and his inability to sustain a dialogue with parliamentarians would contribute to a social, political and religious fragmentation within the country.

Charles’s financial management also left a lot to be desired, none more so than his introduction of “ship money” in order to raise more revenue for the Crown. This involved the tradition of coastal communities providing ships for the Crown, or, if this was not possible, money as a replacement. The levy traditionally was only required during times of war and from coastal regions: now every town in England was required to make this feudal obligation.

In opposition to the monarchy’s financial demands, John Hampden, an English landowner and politician, resisted Charles’s new measures and was subsequently brought before the court. Whilst Hampden lost his case after a twelve day session, his opposition provided impetus for widespread expression of discontent against the king.
Charles’s contempt for the established practices of governance was on display to not only the politicians but the general public. The imposition of taxes and attempts to raise funds through unconstitutional practices only increased hostilities towards Charles’s absolutism.
To make matters worse, Charles’s religious sympathies proved problematic, especially as a series of religious reforms were introduced, with the help of his new Archbishop of Canterbury, William Laud.
Laud, alongside Charles, was busy trying to enforce a widespread sweeping religious uniformity that for many who disagreed with their ideas, such as the Puritans, would become unacceptable. A crackdown on Puritans as well as Catholics would lead many to migrate to America in search of more religious tolerance and freedom.

Charles’s religious policy came under most scrutiny when in Scotland, he was crowned in Edinburgh with an Anglican ceremony taking place in 1633. Three years later, the Book of Canons was introduced outlining the king’s complete power in church matters, leading in the following year to the introduction of the Book of Common Prayer.

Laud and Charles would come up against great religious hostility in Scotland and within a year, local discontent had manifested itself into a National Covenant. The Scottish Covenanter army pledged to resist the changes introduced by the king and proved victorious in the Bishops’ Wars. In April 1640 Charles was forced to summon a new Parliament in order to raise enough funds for war.

In November 1641, further antagonisms came to fore, this time in Ireland. Irish Catholics, deposed by the Scottish Presbyterians who had settled in Ulster, were fearful: conflict appeared inevitable.An Irish uprising against the English and Scottish Protestant settlers resulted in slaughter at Portadown. Such violence incensed further anti-Catholic sentiment and reinforced Puritan parliamentarians desire to oust their king.
With tensions on all sides escalating ferociously, in August 1642 Charles attempted to arrest five members of parliament. This was now more serious than anyone could have imagined: a breakdown in communication had now turned into civil war, a conflict which divided communities across England.
The English Civil War broke out in 1642 and divided the country into Roundheads, supporters of parliament, and the Cavaliers, the supporters of monarchy. This was a war defined by issues of freedom, religion and the future for English governance.
As the fighting raged on, Charles proved himself to be resilient and commanded his army against the parliamentarian forces. The Battle of Edgehill in October 1642 proved indecisive and the fighting continued.
Charles tried in vain to recover his forces and consolidate power in the Midlands, however whilst seeking refuge, in May 1646 Charles was captured and handed over to the English Parliament by the Scots, bringing a conclusion to the First English Civil War.
He subsequently refused parliamentarian demands for a constitutional monarchy and instead launched an escape bid which saw him imprisoned at Carisbrooke Castle on the Isle of Wight.Despite these dire circumstances for the king, Charles was still focused on restoring his power and continued plotting to launch a revolt in his name. Charles’s fate was sealed and in January 1649, he was tried and found guilty of high treason. He was sentenced to death.
On 30th January 1649 at Whitehall, Charles I was beheaded, ushering in a republic and a new tyrant, Oliver Cromwell.