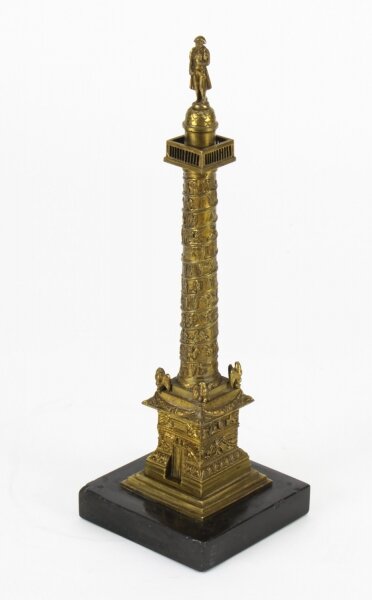 Ref: A1962
Price: £850.00
This is a wonderful antique French Grand Tour ormolu model of the Vendome Column, circa 1880 in date.   This splendid...
Question about item
Request a virtual viewing

This is a wonderful antique French Grand Tour ormolu model of the Vendome Column, circa 1880 in date.
This splendid bronze features Napoleon I standing atop in his 'redingote' coat and trademark hat, after the original by Charles-Emile Seurre. Construction on the original Vendome column was started in 1806 at Napoleon’s direction to celebrate the victory of Austerlitz, and completed in 1810.
The spiralling column is covered in delightful bas-relief bronze plates - which resemble the original bronze plates constructed out of cannons taken from the combined armies of Europe.
It is raised on an elegant black marble platform base.
This stunning high-quality bronze is superbly cast and has an elegant golden patina. It is made from the lost-wax process, otherwise known as 'cire perdue' method.
The attention to detail and quality throughout this piece is second to none.

More
Place Vendôme
is a square in the 1st arrondissement of Paris, France, located to the north of the Tuileries Gardens and east of the Église de la Madeleine. It is the starting point of the Rue de la Paix. Its regular architecture by Jules Hardouin-Mansart and pedimented screens canted across the corners give the rectangular Place Vendôme the aspect of an octagon.

The original Vendôme Column at the centre of the square was erected by Napoleon I to commemorate the Battle of Austerlitz; it was torn down on 16 May 1871, by decree of the Paris Commune, but subsequently re-erected and remains a prominent feature on the square today. 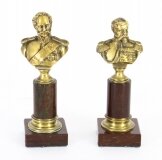