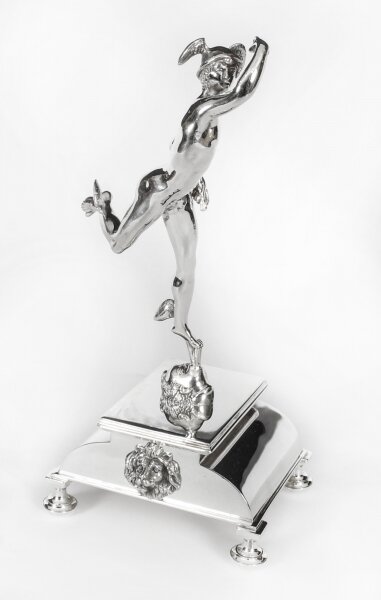 Ref: A1388
Price: £ 0.00
This is a large and beautifully detailed antique silver plated sculpture of Mercury, also known as Hermes, dating from Circa...

This is a large and beautifully detailed antique silver plated sculpture of Mercury, also known as Hermes, dating from Circa 1860 and bearing the makers mark for the silversmith Aston & Son, Birmingham, England.

Mercury is depicted beautifully standing on a gust of wind issued from the mouth of the god Zephyrus. Mercury’s heels are winged allowing the god to fly through the air and deliver messages to the Olympian gods.
The attention to detail here is remarkable and this large bronze is sure to receive the maximum amount of attention wherever it is placed.

In excellent condition having been replated with clear hallmarks and no dings or dents. Please see photos for confirmation.