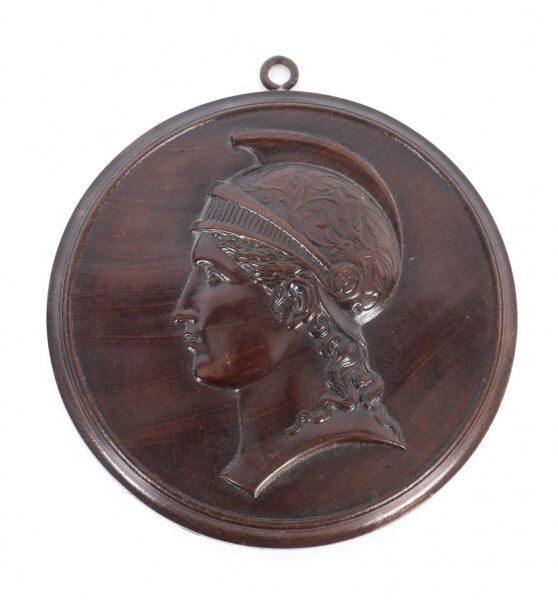 The sensitively carved plaque depicts the profile of Minerva, the Roman goddess of wisdom and strategic warfare, in high relief.

The attention to detail throughout  is second to none.

is the Roman goddess of wisdom and strategic warfare, and the sponsor of arts, trade, and strategy. Minerva is not a patron of violence such as Mars, but of defensive war only. From the second century BC onward, the Romans equated her with the Greek goddess Athena. Minerva is one of the three Roman deities in the Capitoline Triad, along with Jupiter and Juno.

She was the virgin goddess of music, poetry, medicine, wisdom, commerce, weaving, and the crafts. She is often depicted with her sacred creature, an owl usually named as the "owl of Minerva", which symbolised her association with wisdom and knowledge as well as, less frequently, the snake and the olive tree. Minerva is commonly depicted as tall with an athletic and muscular build, as well as wearing armour and carrying a spear. Marcus Terentius Varro considered her to be ideas and the plan for the universe personified.


The Grand Tour was the traditional trip of Europe undertaken by mainly upper-class European young men of means. The custom flourished from about 1660 until the advent of large-scale rail transit in the 1840s, and was associated with a standard itinerary.