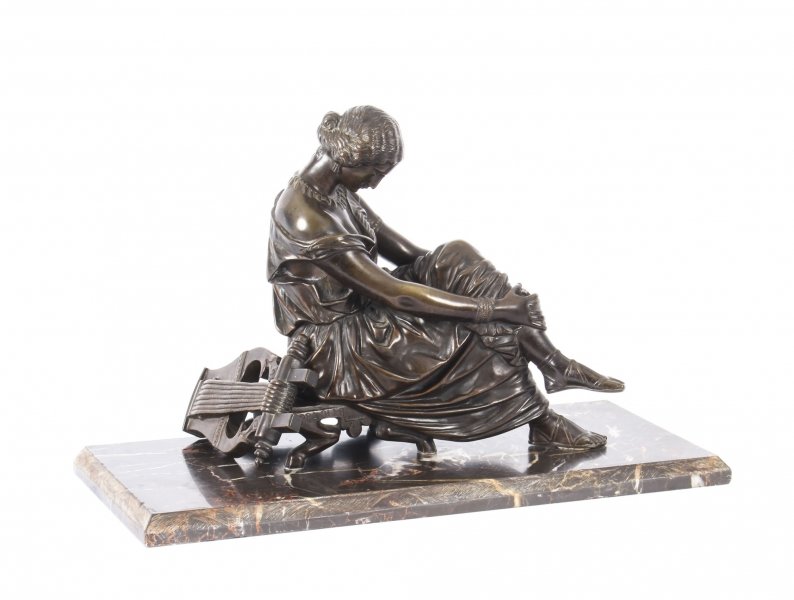 Ref: A1039
Price: £ 0.00
This is a magnificent antique French patinated bronze study sculpture of the allegorical figure of the Greek poetess, Sappho,...

This is a magnificent antique French patinated bronze study sculpture of the allegorical figure of the Greek poetess, Sappho, mid 19th Century in date.
This spectacular and exquisitely executed antique bronze sculpture is after the original marble statue by James Pradier 1790-1852, now exhibited at the Musee d'Orsay in Paris.
It portrays the beautiful poetess Sappho dressed in classical attire, with her finely detailed tunica gliding from one shoulder and her hair elegantly tightened up. She is seated on a low bench with a lyre resting against her back.
The sculpture is extremely life-like and she seems to be in deep and intense thoughts while her head turns downwards and her arms hug her crossed legs.
It is mounted on a splendid polished rouge marble base and it is signed 'J. Pradier', with the Suisse Freres foundry mark.
This high-quality hot cast solid bronze statue was produced using the traditional "lost wax" process, otherwise known as the "cire perdue" method.
The attention to detail throughout this piece is second to none and this striking bronze is ready to add a Classical touch to a very special place in your home.

More
Born in Geneva, Pradier was the son of a Protestant family from Toulouse. He left for Paris in 1807 to work with his elder brother, Charles-Simon Pradier, an engraver, and also attended the École des Beaux-Arts beginning in 1808. He won a Prix de Rome that enabled him to study in Rome from 1814 to 1818 at the Villa Médicts. Pradier made his debut at the Salon in 1819 and quickly acquired a reputation as a competent artist. He studied under Jean-Auguste-Dominique Ingres in Paris. In 1827 he became a member of the Académie des beaux-arts and a professor at the École des Beaux-Arts

Unlike many of his contemporaries, Pradier oversaw the finish of his sculptures himself. He was a friend of the Romantic poets Alfred de Musset, Victor Hugo, Théophile Gautier, and the young Gustave Flaubert, and his atelier was a center, presided over by his beautiful mistress, Juliette Drouet, who became Hugo's mistress in 1833. After the liaison with Drouet ended, he married Louis d'Arcot in 1833 but they would separate in 1845.
The cool neoclassical surface finish of his sculptures is charged with an eroticism that their mythological themes can barely disguise. At the Salon of 1834, Pradier's Satyr and Bacchante created a scandalous sensation. Some claimed to recognize the features of the sculptor and his mistress, Juliette Drouet. When the prudish government of Louis-Philippe refused to purchase it, Count Anatole Demidoff bought it and took it to his palazzo in Florence. (It has since come back to the Louvre).
Other famous sculptures by Pradier are the figures of Fame in the spandrels of the Arc de Triomphe, decorative figures at the Madeleine, and his twelve Victories inside the dome of the Invalides, all in Paris. For his native Geneva he completed the statue of the Genevan Jean-Jacques Rousseau erected in 1838 on the tiny Île Rousseau, where Lac Léman empties to form the Rhône. Aside from large-scale sculptures Pradier collaborated with François-Désiré Froment-Meurice, designing jewelry in a 'Renaissance-Romantic' style.

He is buried in the Père-Lachaise cemetery. Much of the contents of his studio were bought up after his death by the city museum of Geneva.