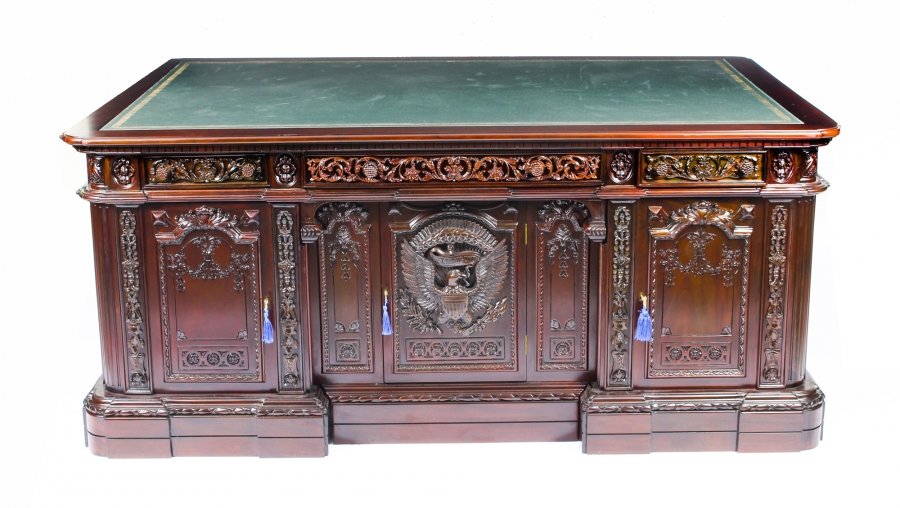 Ref: 09842
Price: £ 0.00
This is a magnificent copy of the Oval Office President's Resolute Partners Desk given by Queen Victoria to President...

This is a magnificent copy of the Oval Office President's Resolute Partners Desk given by Queen Victoria to President Rutherford B. Hayes in 1880 and used by US presidents ever since, dating from the middle of the 20th Century.

This stunning desk has been beautifully made by master craftsmen and features intricate hand-carved floral and foliate decoration throughout. The drawers are made of solid mahogany and the top is lined with a sumptuous green leather writing surface.
The frieze is fitted with a total of seven drawers - two short and two long drawers on each side on the President's side of the desk, and three more drawers on the other side of the desk.
On the President's side of the desk, there are two spectacular pedestals each fitted with splendid panelled doors, and each has two capacious internal drawers. On the other side, the pair of pedestal doors open to reveal spacious cupboards.
The desk bears an engraved brass plaque, exactly as on the original, which tells the story of the desk.
Add a Presidential feel to your library with this monumental desk.

In excellent condition, having been cleaned and waxed in our workshops, please see photos for confirmation.

The Resolute desk is a large, nineteenth-century partners' desk used by seven presidents of the United States in the White House Oval Office as the Oval Office desk. It was a gift from Queen Victoria to President Rutherford B. Hayes in 1880 and was built from the English oak timbers of the British Arctic exploration ship HMS Resolute. Franklin Roosevelt requested the addition of a door with the presidential seal to conceal his leg braces. Many presidents since Hayes, except Johnson, Nixon, and Ford, have used the desk at various locations in the White House.

The desk was removed from the White House only once, after the 1963 assassination of President John F. Kennedy, when President Lyndon Johnson allowed it to go on a traveling exhibition with the Kennedy Presidential Library. After this it was on display in the Smithsonian Institution.

President Jimmy Carter brought the desk back to the Oval Office in 1977, where Presidents Ronald Reagan, Bill Clinton, George W. Bush, Barack Obama, and Donald Trump have used it. George H. W. Bush used the C&O desk in the Oval Office, but kept the Resolute desk in the White House.

The original design plan and elevation for the "President's Desk" were created on September 9, 1879. They are now kept by the National Maritime Museum, Greenwich, England and can be viewed online.

The National Maritime Museum's September 9, 1879 design plans are drawings for two different gifts proposed by the Admiralty but never executed, a "Secretaire" and a "Library Table". The library table and the President's secretaire were never implemented and these proposed gifts were replaced with William Evenden's 1880 Resolute desk. The Evenden desk delivered to President Hayes does not accord with the plan held at Greenwich except for the order imperative that it "be made from the timbers of the late Arctic Ship 'Resolute'". 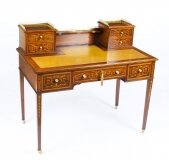