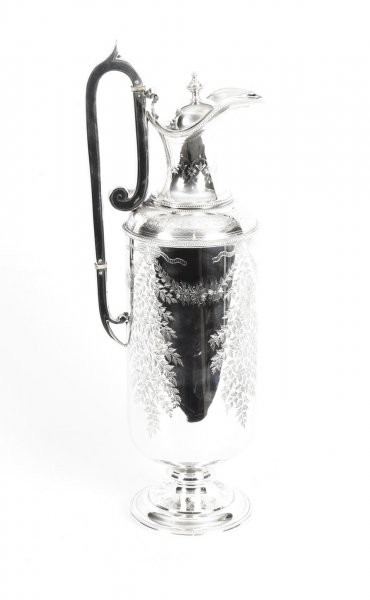 Ref: 09762
Price: £ 0.00
This is an exquisite English Victorian silver-plated claret jug, bearing the makers' mark of the renowned silversmiths Martin...

This is an exquisite English Victorian silver-plated claret jug, bearing the makers' mark of the renowned silversmiths Martin Hall & Co, Sheffield, circa 1870 in date.
This magnificent claret jug has a very stylish circular straight-sided body, stands on an elegant circular base and features a waisted neck with the original hinged lid.
It has exceptional engraved floral decoration throughout the body and a superb geometrical handle which adds a distinctive look to this highly attractive piece.
It is further embellished with splendid beaded decoration to the lid, the neck, the body and the base.
The underside of the claret jug bears the makers' mark 'M H & Co' for Martin Hall & Co, and the registration number 9201.
The unique quality and design of this claret jug will make it a treasured piece for any discerning collector.

Claret Jug - is used to describe a table decanter intended for red wine, today also used as a sport's trophy.

the origin of the firm was in the partnership established in 1820 in Sheffield by Henry Wilkinson and John Roberts who traded as Wilkinson & Roberts. Wilkinson left the business and in 1846 John Roberts entered in partnership with Ebenezer Hall (his apprentice in 1836) under the style Roberts & Hall.

In 1854 Richard Martin (of Martin Brothers & Naylor) and Joshua Hall (brother of Ebenezer Hall) entered into the partnership under the style Martin, Hall & Co. In 1866 the firm was converted into an Ltd.

The factory was active at Shrewsbury Works, Broad Street Park, Sheffield with showrooms in London (where they were listed as manufacturing silversmiths and electroplated manufacturers, silver, plated and steel cutlers), Sydney, Birmingham and Glasgow.

Besides its sterling silver and electroplated items, the firm had a successful cheaper line of products on a patented white metal called "Martinoid".

After WWI and a brief association of interests with Gladwin Ltd the firm went in liquidation and was struck off the register in 1936 (according to another source the business was sold to Frank Cobb & Co in 1931/1932). 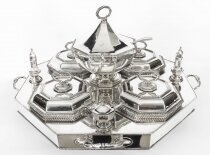