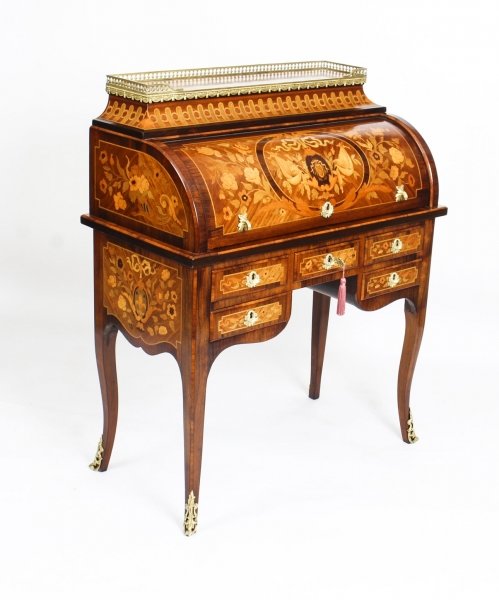 This is a gorgeous antique French kingwood & walnut marquetry Louis XV Revival secretaire a cylindre, circa 1870 in date.

It is decorated throughout with beautiful floral marquetry and the centre of the cylinder has a stunning oval heraldic marquetry panel with a crest, flags, ribbons and flowers.

It has a beautiful inset Marmo Griotte marble top with a gilt brass three quarter gallery around it.

The cylinder opens to reveal a fitted interior with four small drawers and a pull out writing surface fitted with an inset gold tooled leather, so there is ample space to write your letters.

Below the cylinder are five small drawers with space for all your pens paper and envelopes.

The bureau has its original ormolu handles and mounts and stands on gorgeous ormolu mounted cabriole legs.

It is a fabulous decorative piece which will look amazing wherever you decide to place it.

Kingwood - is a classic furniture wood, almost exclusively used for inlays on very fine furniture. Occasionally it is used in the solid for small items and turned work, including parts of billiard cues, e.g., those made by John Parris. It is brownish-purple with many fine darker stripes and occasional irregular swirls. Occasionally it contains pale streaks of a similar colour to sapwood. 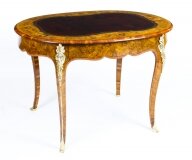