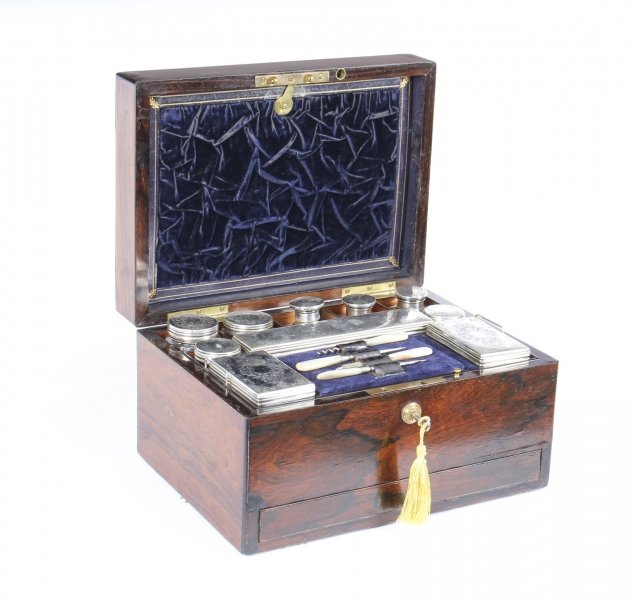 Ref: 09545a
Price: £ 0.00
This is a very attractive antique Victorian gonzalo alves travelling dressing case retailed by Mechi of London and dated 1861....

This is a very attractive antique Victorian gonzalo alves travelling dressing case retailed by Mechi of London and dated 1861.

This stunning case is hinged and of rectangular form. It features a vacant oval cartouche to the lid and encloses a fitted interior with lift-out tray and ten sterling silver-topped boxes and bottles, all hallmarked for London 1861 and bearing the maker's mark of the renowned silversmith James Vickery.

There is amanicure set with mother of pearl handles in the centre, this can be removed to store jewellery and makeup. The top features a compartment that opens with a catch and contains a mirror and a holder for documents and letters.

A secret catch next to the Brahma lock lifts up to release a spring catch secret drawer with three compartments for jewellery and other valuables.

With the original working Brahma lock and key.

More
Alderman John Joseph Mechi (1802–1880) was a silversmith, banker, inventor and Alderman of the City of London. He experimented with new farming methods on his estate at Tiptree in Essex.

Mechi was born in London 22 May 1802, the third son of Giacomo Mechi, a citizen of Bologna, who had settled in England early in life, was naturalised, and obtained a post at Kensington Palace in the household of George III. His mother was Elizabeth, daughter of J. Beyer of Poland Street, London. John at the age of sixteen was placed as a clerk in a house in Walbrook, trading with Newfoundland, a job he had for ten years. In 1828 he set up on his own account as a cutler in a small workshop at 130 Leadenhall Street, from where he removed to No. 4 in the same street in 1830. Between 1830 and 1840 he made his fortune through the 'magic razor strop' which bears his name After the Crimean war and a fashion for beards, sales declined. On 10 November 1840 he took out a patent for 'improvements in apparatus to be applied to lamps in order to carry off heat and the products of consumption'. This was for the external shop-window lamps. From 1859 to 1869 he was in partnership with Charles Bazan, and then gave up his city business and moved to 112, Regent Street.

In 1841, after studying English farming, he became interested in improvements in agriculture, and accordingly purchased a farm of about 130 acres, including Tiptree Hall, at Tiptree Heath, one of the least productive districts in Essex. Here he tried deep drainage and the application of steam power, and made the farm profitable. The press acknowledged the services he had rendered to agricultural science by the introduction of modern processes into his model farm. He was appointed to the shrievalty of London in 1856, and in 1858 elected an alderman of the city. He was a member of the council of the Society of Arts, and was a juror in the department of art and science at The Great Exhibition of 1851 and at the Paris Exposition Universelle of 1855. His 1857 publication, How to Farm Profitably, had in various forms a circulation of ten thousand copies.

The failure of the Unity Joint Stock Bank in 1866, of which he was a governor, and an unfortunate connection with the Unity Fire and General Life Assurance Office, caused him such heavy losses that, instead of becoming Lord Mayor of London, he was in August 1866 obliged to resign his aldermanic gown. Many bad seasons followed at Tiptree farm, particularly that of 1879, and at last, worn out with diabetes and broken-hearted, his affairs were put in liquidation on 14 December 1880. He died at Tiptree Hall on 26 December 1880, and was buried in Tiptree Church on 1 January 1881. He was married twice; firstly, in 1823, to Fanny Frost, and secondly, in 1846, Charlotte, daughter of Francis Ward of Chillesford, Suffolk. A subscription was made for his widow and daughters.