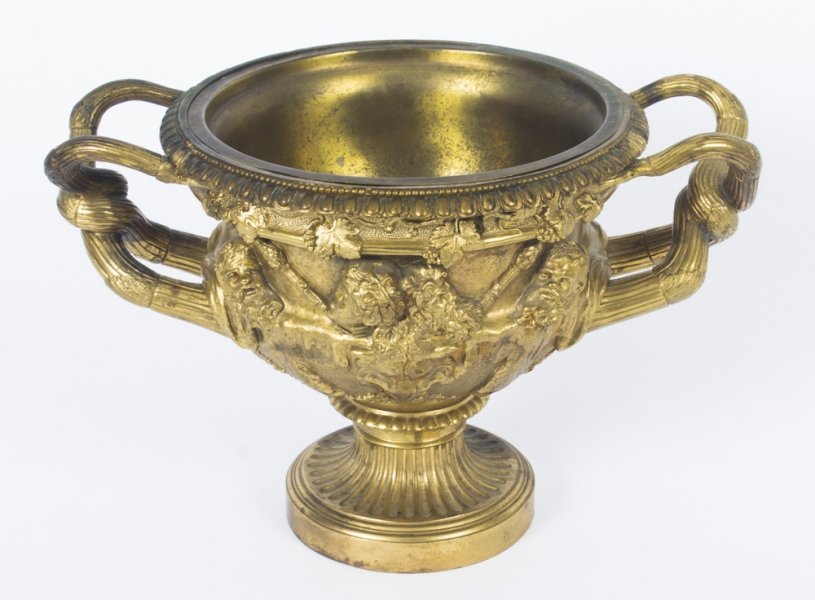 This is a beautiful antique Italian Grand Tour gilt bronze model of the Warwick vase, C 1860 in date.

This stunning bronze is superbly cast and has a superb gilt patina. The vase features egg and dart rim, bifurcated vinestock handles and the body is cast with masks of Bacchus and Hercules between two satyrs, with the pelt of the Nemean lion below, and raised on a circular spreading base with a fixed liner.

The attention to detail throughout this piece is second to none and this high quality bronze is made from the lost wax process 'cire perdue'.

In excellent condition. As an antique item its show signs of use commensurate with age, these minor condition issues are mentioned for accuracy and, as seen in the accompanying photographs, the bronze displays beautifully.

More
The Warwick Vase was found in fragments by Gavin Hamilton in 1769–1770 digging in the silts of Lake Pantanello in the grounds of the Villa Tiburtina, the villa of the Roman Emperor Hadrian outside Rome. It was restored in 1772–1774 by Grandjacquet to designs by Piranesi for Sir William Hamilton, who gave it to George Greville, Earl of Warwick. The Vase stood in the courtyard of Warwick Castle for almost two centuries until it was purchased for The Burrell Collection in 1979. A monumental marble sculpture in the form of a two-handled drinking cup, it is decorated with acting masks and motifs relating to the cult of the Roman god of wine, Bacchus (the Greek god Dionysos).

The Vase was one of many fine sculptures with which Hadrian (who ruled the Roman Empire from 117 to 138) adorned the gardens of his palatial villa. The Dionysian imagery of many of these sculptures evoked the pleasures of life enjoyed through good wine and feasting. Since its rediscovery the Warwick Vase has been a major source of inspiration for the Neo-Classical school in the decorative arts in Britain.


The Grand Tour was the traditional trip of Europe undertaken by mainly upper-class European young men of means. The custom flourished from about 1660 until the advent of large-scale rail transit in the 1840s, and was associated with a standard itinerary.